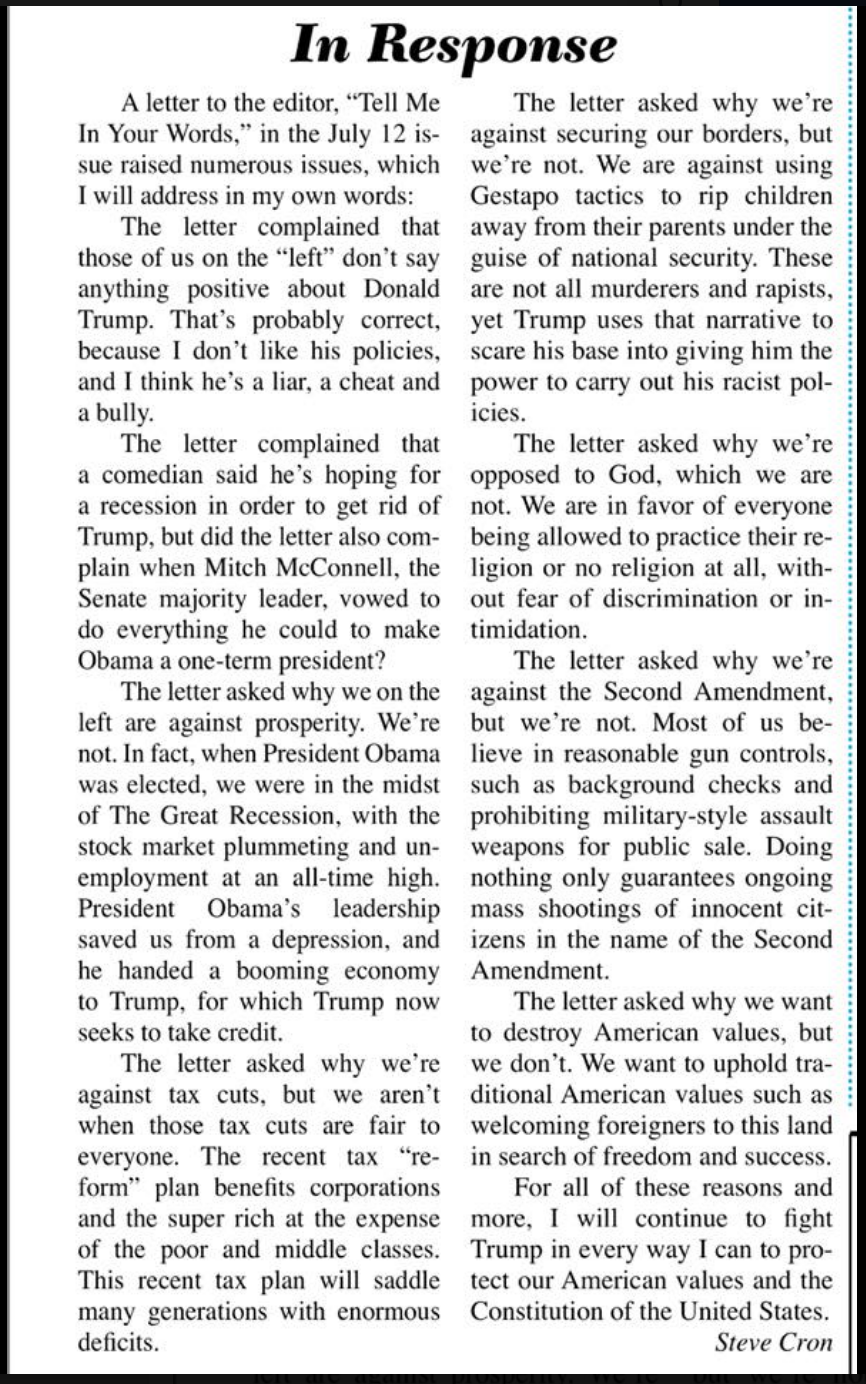 You complain that a comedian said he’s hoping for a recession in order to get rid of Trump. You may recall that when President Obama took office the Republican Senate Majority Leader vowed to do everything he could to make Obama a failed President so that the Republicans could win the next election. Did you write a letter to the editor about McConnell’s remarks? I doubt it.

You talk about the mob mentality of the left. What about the people who were beaten up at Trump’s election rallies, often at Trump’s direction, because they disagreed with him or his policies? Did you complain about that mob mentality? And you probably didn’t complain when a baker refused to bake a wedding cake for a gay couple solely because they were gay, but you’re quick to complain when a restaurant owner didn’t want to serve Sarah Sanders because she disagreed with her political views and was disturbed by the perception that Sanders, too, is a liar.

You ask why we on the left are against prosperity. You’ve apparently forgotten our recent history. In 2008, when President Obama was elected, we were in the middle of The Great Recession, with the stock market plummeting and unemployment at an all-time high following eight years of the Bush Administration. It was President Obama who saved us with bold leadership, while Trump was busy arguing falsely that Obama wasn’t born in the United States. Obama was responsible for reduced unemployment and a soaring stock market. He handed a booming economy to Trump for which Trump now takes unabashed credit.

You ask why we’re against tax cuts. I’m all for tax cuts if they’re fair to everyone, as opposed to the most recent tax “reform” law, which will burden our children and grandchildren with enormous deficits. The middle and lower classes got virtually nothing from the recent tax bill, but lots of fat cats profited enormously.

You ask why we’re against securing our borders. I’m not, but I am against using Gestapo tactics to tear children away from their parents, many of whom were seeking asylum in this country as a result of brutal conditions in their homelands. These people are not criminals. They came here seeking legal protection from a nation that traditionally has welcomed people to our land of freedom and opportunity. Trump uses dishonest scare tactics to portray these people as rapists and murderers, when statistically their crime rates are lower than those of U.S. citizens. He plays to the fears of people like you, and when anyone confronts him with facts or logic, he discredits them as “fake news.”

You ask why we’re opposed to God. I’m not. The “left” is made up of people who belong to many different faiths, or none at all. All of them are guided by a commitment to tolerance and fairness. You want people who act based on the Constitution, but the First Amendment establishes freedom of religion. I am for letting people pray to their God in any way they see fit, but I am against making any form of Christianity the official religion of the United States. In fact, the Establishment Clause of the Constitution prevents it. People of all religions should be free to pray in any church, synagogue, temple, or mosque that suits their needs, but no one should be discriminated against because of their religious beliefs, or because they don’t belong to any religion. Don’t you agree?

You ask why we’re opposed to the Second Amendment. I’m not, but I am opposed to the indiscriminate killing of children in their schools, and people in their places of worship and other gatherings. That means that I oppose guns being sold without background checks, and I oppose allowing members of the public to possess military-style assault weapons. If you could show me somewhere in the Second Amendment where it says that there can be absolutely no regulations on the sale or proliferation of guns, I might change my mind, but you can’t because it doesn’t. It seems to me that it’s time for meaningful gun regulation in this country. If you disagree, then perhaps you should volunteer to tell the next grieving parent of a school kid, or a church worshiper, or a movie-goer that your defense of a single ambiguous sentence in the Second Amendment is more important than their right to live.

You ask why we don’t love the Constitution, but I do. In fact, I cherish the Constitution and revere so many of the rights guaranteed in it. I love the freedom of the press, so it pains me when Trump bullies and mocks journalists who are critical of him. I love the checks and balances in the Constitution, so I’m upset that he belittles our judiciary when they issue sound rulings that limit his actions, or when he mocks and harasses those in Congress who have a different viewpoint than his. I’m extremely concerned when Trump does everything he can to undercut the credibility of the FBI and Justice Department as they investigate a very real threat to our sovereign elections. The indictments last week are further proof that Russia was heavily involved in undermining our 2016 elections, yet Trump continues to call the investigation a witch hunt.

You ask why we’re insistent on limiting our liberties. I’m not, in fact, I’m in favor of protecting all of our liberties. I cherish the freedom of choice in all areas, including reproductive freedom. If you are so concerned about our liberties, why aren’t you demanding that Trump appoint a Supreme Court justice who will uphold a woman’s right to choose what do with her own body—a choice rooted in the constitutional right to privacy. I fight for all of our liberties, so why don’t you?

You ask why we want to destroy American values, but I don’t. Perhaps, however, I see a different set of values than you. In the words of Ronald Reagan, I still see America as “a shining city on a hill.” Trump, on the other hand, wants to isolate us from the rest of the civilized world while he coddles, and praises, brutal dictators like Putin and Kim, and alienates all of our traditional allies. Trump’s values of isolation, hate, and fear-mongering are not my values, and they’re not the values that have made us the great nation that we are today. We should be embracing diversity, not scorning it, welcoming new ideas, not disregarding them, and we should retake our role as leader of the free world, not its pariah.

You didn’t ask, but let me tell you another reason why I hate what Trump is doing to our country. You must be aware that we’re now the only country in the world which hasn’t signed on to the Paris climate accords, which seek to preserve the physical well-being of our planet. The overwhelming majority of scientists around the world agree that global warming is a threat to our very existence, yet Trump pulled us out of the Paris climate accords and continues to deny the science behind global warming. He has taken this same reckless approach to other environmental issues such as clean air and clean water, and has decimated the Environmental Protection Agency.

For all of these reasons and more, I will continue to fight Trump in my own way, with my own words, so as to protect our American values and the Constitution of the United States.