Time to Eliminate the GOP?

The latest from PPDC board member Ted Vaill as published in the trusty LA Progressive. Heads-up, you may find Ted's prescriptions — the opinions are solely his and not those of the PPDC — in this one quite provocative and controversial. Worth the read!

Time to Eliminate the GOP?

Biden must take firm action to suspend the GOP from further political activity by implementing the Insurrection Act and declaring martial law in states that supported Trump and his Trumpsters.

Starting on June 9, the House Select Committee will hold hearings on the 1/6 Insurrection, what led up to it, how it was planned, how it was implemented, who is responsible, and who must be punished. It is quite likely that the evidence presented will pin ultimate responsibility directly on Donald Trump and his sycophants. Will these Republican insurrectionists accept responsibility, or will they seek to stage another insurrection to take over the government, and impose a Trumpocracy on our country? Or will it happen early next year after they take over the Senate and House as a result of the November midterm elections?

As we gear up for the November midterms, we're thinking about what's important to tell voters.

Since midterms tend to be referendums on the President's job approval to an extent, here's a handy way to remind people of just how much President Biden has achieved in his first year.

Do we all want and need more? Of course! But we have to stop to appreciate what's been done thanks to the President's persistence and skills. It's a lot. 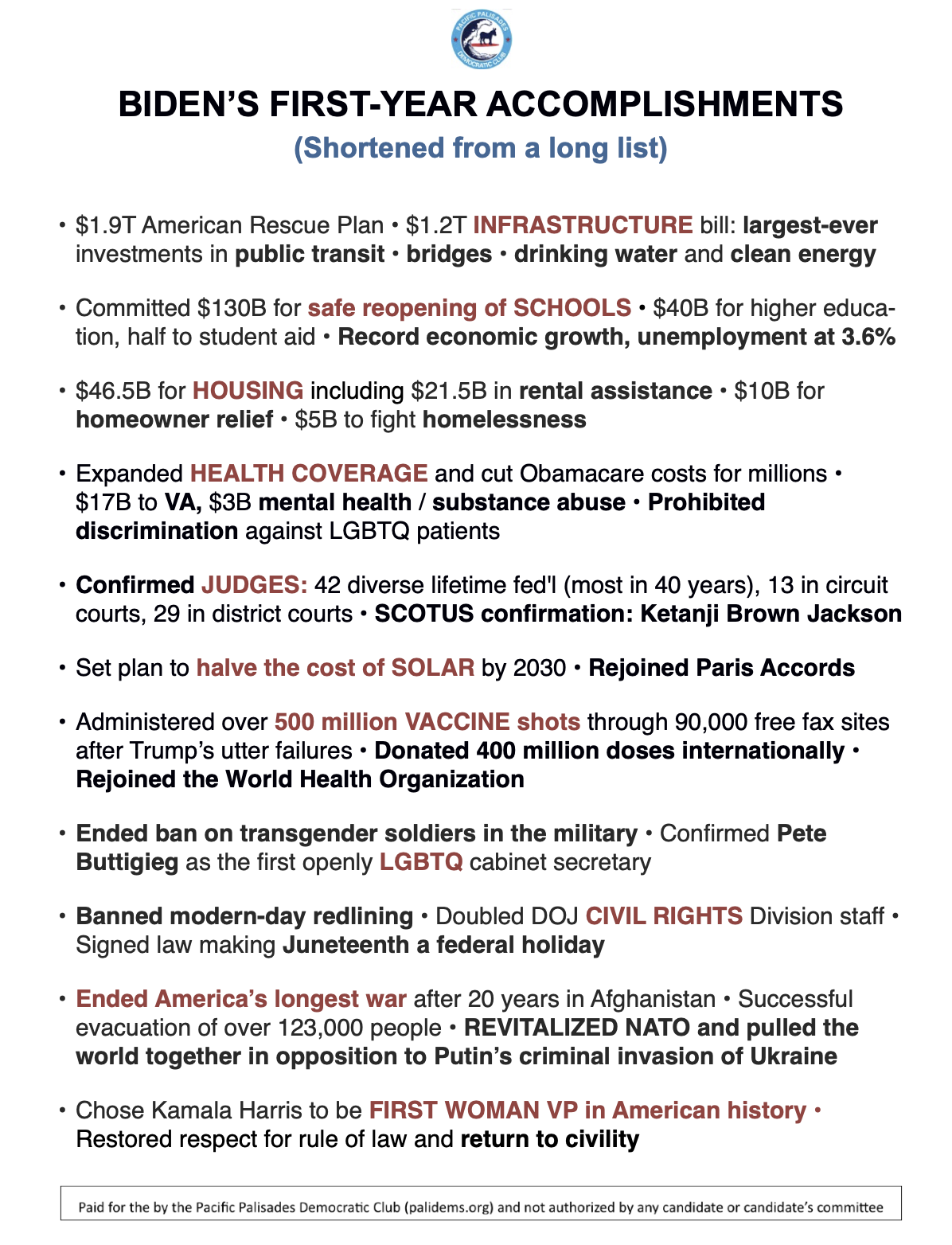 1 reaction Share
PaliDems board member Edward Everett Vaill pens another insightful article for the LA Progressive.
•
Here's a taste:
•
The New York Times this past weekend had an editorial by Christopher Caldwell entitled “New Poll Spells Trouble for Democrats.” Trouble is, the author is a long-time Republican operative with time served on Republican Bill Kristol’s Weekly Standard and now a fellow at the right-wing Claremont institute. His article is crammed with wishful thinking....
•
Read the rest here: https://www.laprogressive.com/democrats-in-trouble/amp/