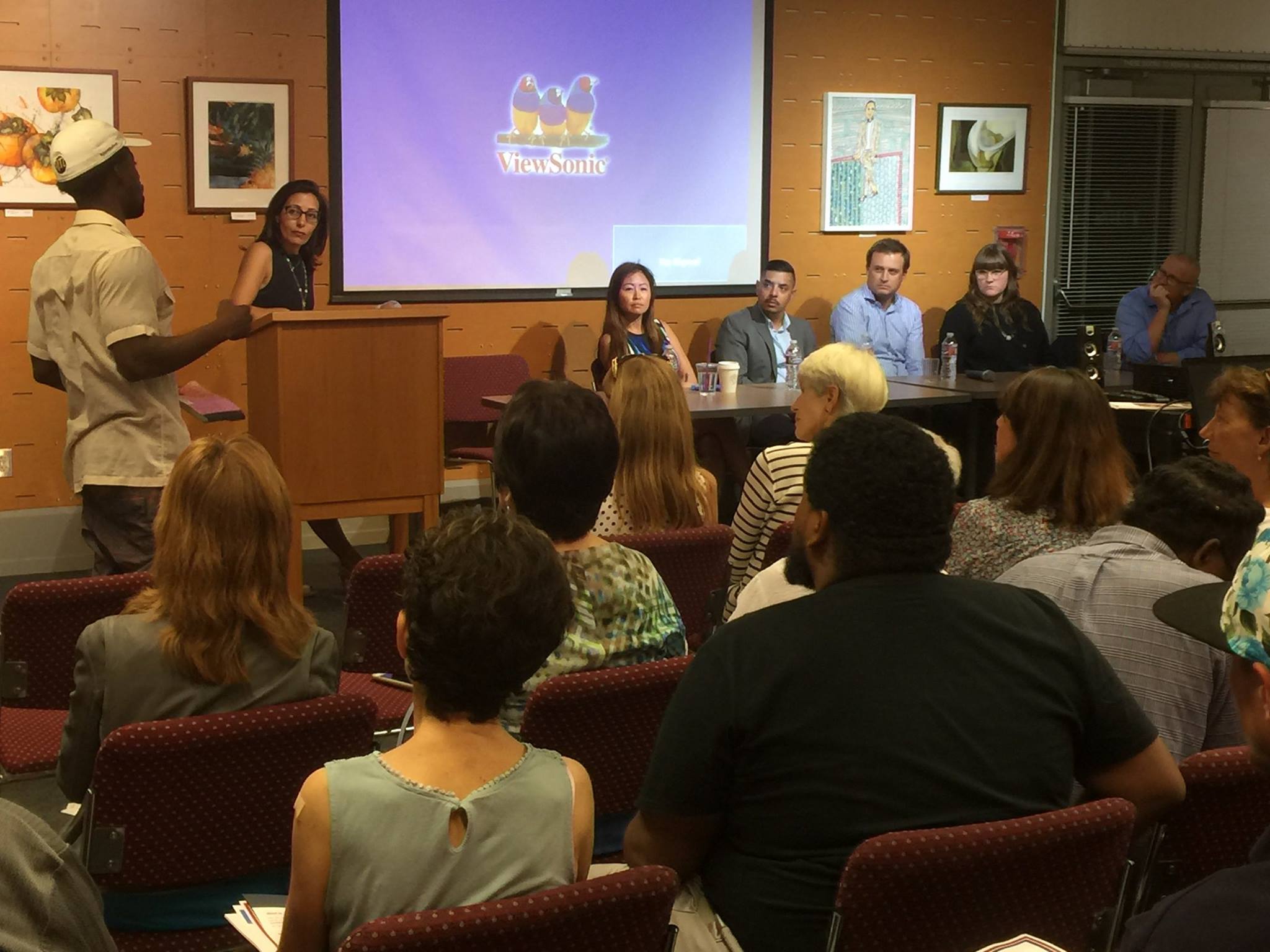 On October 24, 2017 the Pacific Palisades Democratic Club presented a panel and town hall-style exchange with the community focused on housing in the aftermath of County Measure H and City Proposition HHH.

Bonin has been an advocate of better housing policy and a proponent of much of what is unfolding as affordable housing incentivized policy city wide. He gave a brief history of housing in LA and the circumstances that have led to the current shortage that we are experiencing now. He tied the lack of available affordable housing with the homeless crisis LA is facing, and applauded the new found collaborative approach that the City and County have forged in order to finally bring resources and strategies together, and couple them for impactful results. He explained that the County Measure H money (which began to be collected as of October 1st) will go mostly to the services contemplated in permanent supportive housing units aimed at relieving homelessness, while the City’s Prop HHH money will go to incentivize developers and encourage building to increase the housing stock citywide.

Each proposes a tax to generate income to be allocated to housing initiatives to increase the housing stock in LA, and address, among other things, the homeless crisis as well as housing affordability for low wage earners. Bonin admitted that much of this planning will not translate into units for another 2/2.5 years, but said the City also had plans to convert motels, change the mode of shelters and make other immediate options available to relieve the current housing crunch, as well as offer people experiencing homelessness some viable relief from the streets.

LA Family Housing and Safran and Associates, who were both builders in the room, gave the perspective from the housing stock creation point of view.

Safran is uniquely a mixed use builder, that is positioned to receive HHH money in order to develop projects in locations near transit that can be mixed use, and contain affordable housing units. They are already working on a project in West LA (CD11) where they’ve conducted a great deal of community outreach and have been able to address neighbors concerns and design a project that has the support of the community.

LA Family Housing is a nonprofit organization that is solely dedicated to the provision of services and housing for homeless individuals and families. They are not only a service provider, but also property owners and builders. They currently have a project underway, constructing a permanent, supportive housing complex in Hollywood for homeless men and women. The complex is architecturally appealing and has been built with County support (Hollywood is in our County District and their Supervisor is Sheila Keuhl). They are positioned to receive more Measure H dollars as they look to build more units.

The Department of City Planning, which has created a Housing unit to address the issue, provided guidelines along which builders were expected to develop housing. These guidelines addressed aesthetics and architectural modeling, as well as mass and community character concerns. The Department of City Planning will be instrumental in housing development as HHH unfolds, particularly because they will be streamlining building applications that contain a mixed-use, affordable housing component and will have to balance the need for prolific building with the demands of local communities for whom “streamlining” means eliminating local control.

The County laid out its plans for research as well as funding and a collaboration with City and State agencies to develop guidelines and opportunities to continue to enable the increased housing stock planned and make room for more by creating funding mechanisms and incentives for growth.

We did not have time to discuss the interface of LA City and County plans with legislation from the State, which aims to compliment the LA strategy to create funding mechanisms, incentivize builders and streamline processes to increase housing stock across the state. Below is an update on the legislation that the Governor has signed, to support and complement the strategies that cities and counties across the state are adopting to increase housing supply:

According to a 2016 McKinsey Global Institute Study, CA needs 3.5 new homes by 2015, to keep pace with new jobs across the state, and a housing crunch that won’t subside. To reach that goal, the State would need to build almost four times as many new homes as the current projections of 100,000 units per year.  That amount of new homes in one year hasn't been built since at least 1954.

Some of the ideas suggested in this year’s “package” of housing Bills which Gov. Brown signed include: a new fee on real estate transactions and a $4-billion bond on the 2018 ballot that together could raise close to $1 billion a year in the near term to help subsidize new homes for low-income residents.

The package isn’t expected to be a fix. In fact it will hardly put a dent in the state’s housing problems. Money from the bond and the new real estate fee are estimated to finance about 14,000 additional houses a year. But, the bills and the gesture puts a focus on housing and sends a message to State lawmakers that new bills to boost funding mechanisms, streamline laws and incentivize builders to increase the state’s housing stock are paramount, and eagerly expected at the Governor’s desk – whomever it may be.

Here’s a rundown of the package of bills signed, and the need they address:

Most of the money raised by Senate Bill 2, the $75 real estate transaction fee, and Senate Bill 3, the $4-billion housing bond, would go toward helping pay for the development of new homes for low-income residents, defined as people earning 60% or less of the median income in a given community. So in Los Angeles that means a family of four having a combined income of less than $54,060 a year.

For those homes, residents will be able to earn up to 150% of median income in the highest cost areas — that’s $135,000 annually for a family of four in Los Angeles, for example.

Both measures include dollars for other efforts besides helping subsidize homebuilding.

SB 2 is expected to raise $250 million a year by charging people a $75 starting fee to refinance a mortgage or make other real estate transactions, except for home or commercial property sales. The most anyone can be charged is $225 per transaction. SB 3 will authorize a bond that will be paid back with interest by tax dollars earmarked in the state budget, though the veterans will repay their loans themselves.

A trio of measures aims to whittle down some of those rules. Senate Bill 35 forces cities to approve projects that comply with existing zoning if not enough housing has been built to keep pace with their state home-building targets.

Assembly Bill 73 and Senate Bill 540 give cities an incentive to plan neighborhoods for new development. Under AB 73, a city receives money when it designates a particular community for more housing and then additional dollars once it starts issuing permits for new homes. In these neighborhoods, at least 20% of the housing must be reserved for low- or middle-income residents, and projects will have to be granted permits without delay if they meet zoning standards.

Because of a 2009 court decision involving a Los Angeles developer, cities are not allowed to force builders of apartment complexes to reserve a portion of their projects for low-income residents. Those policies were called an illegal expansion of rent control.

Now, Assembly Bill 1505 (Bloom) changes the rules so that cities can once again implement low-income requirements.

The California Housing Partnership Corp., a nonprofit low-income housing advocate, recently estimated that 14,000 low-income units in Los Angeles County are at risk of losing their income restrictions in the next five years.

Assembly Bill 1521 requires owners to accept a qualified offer to purchase the apartment complex from someone who pledges to continue renting the homes to low-income residents.

Every eight years, cities and counties have to plan for enough new homes to meet state projections of population growth. This process, however, has not led to sufficient housing production to meet demand.

Three new laws expand requirements for cities to plan for housing. Assembly Bill 1397 forces local governments to zone land for housing where it could actually go, instead of putting sites they don’t intend to approve in their housing plan.

Senate Bill 166 makes cities add additional sites to their housing plans if they approve projects at densities lower than what local elected officials had anticipated in their proposals. The goal is to make up for the housing units that weren’t built.

Assembly Bill 879 instructs cities to analyze how long it takes developers to actually build their projects once they’ve been approved, and then take steps to shorten that time.

The Housing Accountability Act passed in 1982 prohibits cities from saying no to housing projects that meet zoning requirements simply because they don’t like them. But such cases are hard to prove. Three measures, Senate Bill 167, Assembly Bill 678 and Assembly Bill 1515, will beef up the existing law by making it easier for developers to prove a city acted in bad faith when denying a project, and by increasing the penalty to $10,000 per unit they reject.

Editor’s Note:
The impetus to create a housing plan and hold cities to follow through with development is to allow the growth of housing stock and prevent it from being overly constrained with local control. According to the Legislative Analyst’s Office (a non partisan fiscal and policy advisory group) Local Resistance has long been a Barrier to More Housing Development.

But the Consequences of California’s Housing Shortage Are Extensive. Too little home building has serious adverse effects that extend beyond a community’s boundaries.

California’s rapidly rising housing costs pose a difficult dilemma for state policy makers. If the status quo is maintained, the state’s housing challenges will worsen. At the same time, bringing about a meaningful increase in housing production would require a major shift in the way cities and counties plan for, and approve, housing. Such a change likely would be complicated and contentious.

Still, the Governor has proposed significant changes to how cities and counties approve housing. He has proposed streamlining the approval process for multi-family housing developments that are built in urbanized areas and include affordable housing. If passed, this proposal would mean that eligible housing applications across the state would be approved “by right,” meaning they would not be subject to case-by-case local approvals or review under the California Environmental Quality Act.

Under the governor’s proposal, eligible projects are multi-family housing developments surrounded by urban areas, which have affordable housing components of 5 to 20 percent and conform to local general plan and zoning standards. His plan also aims to provide relocation assistance to displaced households

Looking ahead, here are some Gubernatorial ideas floated by candidate (and early front runner) Gavin Newsome to tackle homelessness: