Can Our Democracy Be Saved?

Trump FiredFor the first time in my seven decades of life, I fear that our democracy may be endangered, by a traitor President and a cowardly Republican majority in Congress, who may also be aiding and abetting this treason. And I was alive when the Japanese attacked Pearl Harbor, and when the Cuban missile crisis happened. 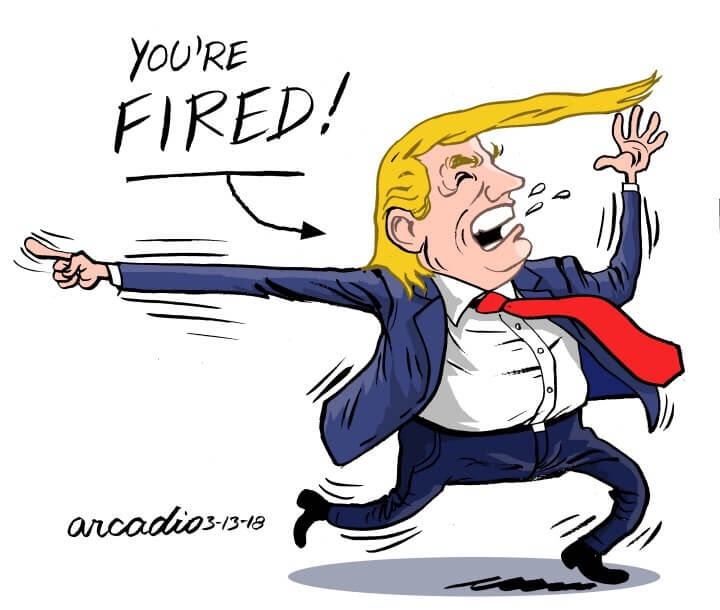 The supposed “election” of Donald John Trump as President of the Electoral College of the United States of America, with the help of the Russians, is a disaster for our country. Retired highly decorated (for heroism in Vietnam) four star General Barry McCaffery has just come to the conclusion that President Trumputin “is a serious threat to U.S. national security…because he is refusing to protect vital U. S. interests from active Russian attacks…and is under the sway of Mr. Putin.” In other words, PRESIDENT TRUMPUTIN IS A TRAITOR.

For the first time in my seven decades of life, I fear that our democracy may be endangered, by a traitor President and a cowardly Republican majority in Congress, who may also be aiding and abetting this treason.

Another danger signal is Special Prosecutor Mueller’s wide-ranging subpoena directed to The Trump Organization for all records regarding their ties to Russia or Russian interests. This may be interpreted by Trumputin as crossing the “red line” he has drawn regarding how far the Mueller investigation can go.

And given the extensive, decades-long extensive ties of The Trump Organization with the Putin-friendly Russian oilgarchs who have financed Trumputin’s business operations over at least the past decade (since no legitimate banks would loan him money after four bankruptcies), such a subpoena would unearth a mother lode of incriminating documents.

Will Mueller Be Fired?

There is now a real danger that Trumputin will seek to fire Mueller, in a desperate attempt to stop his investigation. He may fire Sessions (rewarding him for doing his bidding and firing the FBI’s #2, Andy McCabe, in a vindictive effort to deprive him of his pension), and then go after the DOJ’s #2, Deputy AG Rod Rosenstein, firing him.

And two problems exist if Trump is successful in firing Mueller:

Trumputin cannot easily fire the 15 or so career DOJ attorneys working under Mueller, who can continue the investigations and impending indictments before the Grand Juries looking at Trumputin’s activities over the past decade or so.
Even if Trumputin is successful in stopping or impeding the Mueller investigation, two things could happen:
This action may finally cause the GOP cowards in Congress to step up and support impeachment articles against Trumputin, or otherwise put Mueller into another position where he could continue his investigation; or
New York Attorney General Eric Schneiderman could file companion State of New York charges against Trumputin under New York law, which could not be stopped by Trumputin, even if he tried to pardon himself and everyone who worked for him on the Presidential campaign. He could only pardon them for federal crimes (if indeed it is legal to do that), and not state crimes.
And Putin is becoming more warlike. In addition to subverting the 2016 American Presidential election, after annexing the Crimea and invading Ukraine and facilitating the doping of Russian Olympic athletes, Putin has poisoned and murdered Russian spies now living in England, and has hacked into the American power grid and nuclear plants, possibly enabling his operatives to cause an American nuclear meltdown similar to Chernobyl. This is close to a declaration of war by Putin against the United States and its allies.

In an article to be published this weekend in the New York Times, Andrew Sullivan, in a review of two books by former University of Chicago Law School professor Cass Sunstein (whom I knew there) on impeachment of a U.S. President, makes the point that it is really hard to do. Sunstein states that impeachment is a political and not a legal decision, and is based on conviction of “Treason, Bribery, or other High Crimes and Misdemeanors”.

A “high crime” is an act that can only be done by someone in a unique position of authority, where the act is political in character, and if the person does it to circumvent justice. The term “high crimes and misdemeanors” has been well known in the English Parliament since 1386, and has been applied to such offenses as:

misappropriating government funds
appointing unfit subordinates
not prosecuting cases
not spending money allocated by Parliament
promoting themselves ahead of more deserving candidates
threatening a grand jury
disobeying an order from Parliament
arresting a man to keep him from running for Parliament
losing a ship by neglecting to moor it
helping to suppress petitions to the King to call a Parliament
granting warrants without cause
bribery
All of these offenses had one thing in common: the charged official had abused the power of his office and was unfit to serve. During the writing of the Constitution, Benjamin Franklin (whom I have recently found out is an ancestor) proclaimed that the power of impeachment and removal from office was necessary when the Executive has “rendered himself obnoxious”, and that the Constitution should provide for the “regular punishment of the Executive when his conduct shall deserve it…” In other words, it is highly subjective. Like pornography, you know it when you see it…

However, Sunstein argues that if Trumputin starts to construct an authoritarian state, as long as one major political party (the GOP) endorses it, and a solid plurality of Americans support such an authoritarian slide, it is unstoppable. Franklin even forecast the moment we are in now:
he believed that the American experiment in self-government “can only end in despotism, as other forms have done before it, when the people become so corrupted as to need despotic government, being incapable of any other.”

ted vaillIn an earlier article I wrote for LAProgressive, “Trumputin: Fascist in Training“, I found that it took only about two and a half years for Hitler to turn the Weimar Republic into a Hitler dictatorship.

We may only have a year or so more to get rid of Trumputin….